It was the last days of the late Allameh Askari’s life, and he went to the hospital for dialysis because his kidneys were in trouble. Due to his advanced age, naturally they could not use the vein of his hands for dialysis, so blood was inevitably drawn from the vein of his neck, and the device that was attached to his neck hung for a while, and it was hurting his neck. And we taped the device to his neck so that it would not bother him.  I was constantly in his presence and I was lucky to stay with him at night. One day when I came to the hospital, I saw that Allamah Askari had put his hand on his neck and he was a little upset and cried.

I said, “if it bothers you, tell me to call the nurse to change this.”  He said: “No!  It does not bother me much. Just a bit it is normal.

I have to put this on my neck.  There is no other way.  I was thinking that these two very small needles that have been inserted into my neck vein bothers me a little bit… “Then he became very upset and cried.  Then continued: “What did Ali Asghar (the six months old son of Imam Hussein) go through?…”

He used this story to make a mourning for Aba Abdullah Al-Hussein (AS) and to mention Ahl al-Bayt. Allamah Askari was very loyal to Ahl al-Bayt.

I remember when some of our family and relatives visited Allamah Askari and stayed at his house, He would sit in his library and not have much to do with us, but there were times when we would sit and talk and laugh with each other and such times.

when Allamah Askari felt that we were wasting our time, he would come to us and say a sentence to us, which is very memorable for me. He would say:

He instilled in us that the words of Amir al-Mu’minin (Imam Ali (as)) are so valuable and high that he should invite us to these words. Because they are not ordinary words.

And we always listened to him. He narrated hadiths from Imam Ali (AS) with excitement and honor and conveyed this feeling to us.  It really made us feel that we enjoyed the fact that Amir al-Mu’minin [Imam Ali] (AS) was our Imam and we were proud of that.

He would always say a sentence with a smiling face:

Then he gave an example:

That divorce is in the hands of a man.  And he said that because this was said by the Prophet, it is the law and this cannot be changed.  Then he said:

“I liken the words of Imam Ali (AS) to big rocks that falls hard on the ground from the mountain.”
So decisive and firm.  Then he gave an example that Amir al-Mu’minin [Imam Ali]  (AS) said:

Very strong and firm. This was the example that Aallamah Askari made about the words of Imam Ali (AS). 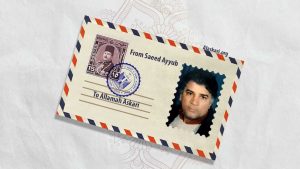 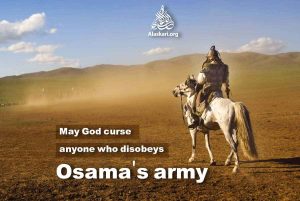